2022 marks the 136th anniversary of the establishment of C.L. Barnhouse Company, one of the oldest and continuously operating band-focused music publishing companies in the world. 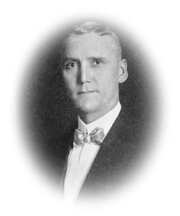 Charles Lloyd Barnhouse, a self-taught cornet player, conductor, and composer, left his West Virginia home to find out what life would bring him through his musical talents. His travels brought him to southeast Iowa, where he assumed leadership positions with the town bands of Mt. Pleasant and Burlington, respectively; and starting his publishing enterprise in 1886 with catalog #1, “The Battle of Shiloh” March.  In December of 1890, he settled permanently in Oskaloosa, as conductor of the Knights of Pythias band.  His own works, along with those of Russell Alexander, Fred Jewell, and Karl L. King, led the C. L. Barnhouse Company to a position of prominence in the band world.  During his career, Barnhouse developed his catalog to appeal to bands of lesser experience levels, as well as the more experienced professional and circus bands.  His adopted home of Oskaloosa mourned his passing on November 18, 1929, as the town lost a beloved citizen and community leader.

C.L. “Lloyd” Barnhouse Jr. took control following his father’s death and led the company into a new era of music. The school band movement was just in its infancy, and Lloyd introduced the first publications designed specifically for school bands.  Also, during the World War II era, the C. L. Barnhouse Co. became a major supplier of music for military bands.

In 1957, Lloyd Barnhouse turned over management of the company to his sons, Charles L. “Chuck” Barnhouse III and Robert Barnhouse, Sr. Lloyd served as an advisor to his sons until his passing in 1967. During Chuck and Bob’s leadership, the company introduced new product lines including the jazz catalog, marching band publications, and several texts and method books which have become standard. Bob’s son, Robert Barnhouse Jr. joined the company in 1979 and led the technological conversion of company front office, inventory and production systems. Bob Jr. retired in 2005. Music by a new generation of composers: Alfred Reed, James Swearingen, David Shaffer, Ed Huckeby, Steven Reineke, and Robert W. Smith became hallmarks of the present-day Barnhouse catalog. Additionally, advertising efforts expanded through the pioneering use of recordings. Bob Sr. retired in 1992 and died three years later. Chuck continued to serve the company as President and Chairman of the Board of Directors in his retirement until his death in 2012.

In 1987, Andy Clark joined the C. L. Barnhouse Co., bringing his very successful Norman Lee Publishing catalog with him. A veteran composer/arranger/publisher whose experience spans over 4 decades, Andy serves as President of the C. L. Barnhouse Co. In 1998 Andrew Glover joined the company, and as Executive Vice President, manages the daily operations of the company. Both Andys bring an eclectic mix of skills and experiences in music education, performance, publishing, and composition and arranging. In 2014, veteran music educator Kim Benson joined the Barnhouse team, and as Vice President manages music production, the editorial process, and provides insight into many other aspects of the business. In addition to maintaining and enhancing the Barnhouse Company’s position as an industry leader in band music, in recent years the business has expanded to include distribution of several excellent catalogs, including William Allen Music, PlayinTime Publications, RWS Music Company, Daehn Publications, Claude T. Smith Publications Inc., Jay Chattaway Music, BOVACO, and several other prominent publishers.

C.L. Barnhouse Company has grown and prospered throughout the years, outgrowing facilities several times and moving to present headquarters in 1987. In 1993, C.L. Barnhouse Co. unveiled Walking Frog Records, a venture into the creation and distribution of compact discs. The company’s focus is on CD recordings of band music featuring performances by The Washington Winds, The Chicago Northshore Concert Band, Detroit Concert Band, Dallas Wind Symphony and many other world-class ensembles. With Walking Frog Records, band enthusiasts are provided with numerous opportunities to find the music they enjoy on a wonderfully recorded CD.

The C.L. Barnhouse Company is unique among publishing companies for preserving a nearly complete archive of all publications, dating back to 1886.  Virtually all of these products are available today, thanks to the Archive Edition series of publications produced on our in-house printing systems.  As a result, virtually no C. L. Barnhouse publication is out of print.  Additionally, the in-house printing provides for the immediate availability of extra scores and all other products, eliminating the back ordering process.